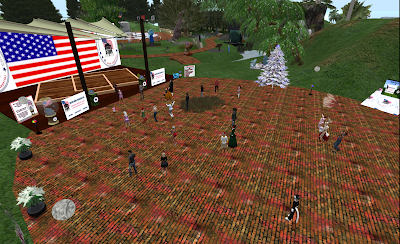 On Sunday December 22, Veterans Isle held it's monthly fundraising concert. Organized in part by Frets Nirvana, the events raise money for the Homes For Our Troops charity.

It is the final Homes For Our Troops benefit tonight folks .... kicking it off with great music.  We are going to give it all tonight to make 2019 the one to beat! Help us exceed 2018'S total donations of $13000 folks.

At 4PM, things started with DJ Waya Snowpaw playing music for the crowd. At 5PM, Zak Claxton took to the stage. Sophie Brumati's turn to perform was at 6PM. At 7 SL time, it was Neomaximus Brandenburg on stage. Last but not least was  Mimi Carpenter  whom sung from 8-9 PM SL time.

As the performers played music on stage, the audience donated cash to two house-shaped kiosks on either side of the stage. When the last singer stepped down, 150,130 Linden dollars, or over $600 USD, had been raised.

More information on Homes For Our Troops can be read at https://www.hfotusa.org.

With a successful year behind them, Veterans Isle and Frets Nirvana can have a Merry Christmas and a happy New Year.