Return Of Sonic’s New World: An Interview With Shadow and Kono 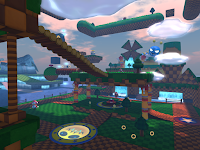 Sonic is not a new videogame character, the game having been made almost 30 years ago. But over time, he's maintained a following of fans over the years (and gotten a number of sequels). While it's old news there are residents with Sonic avatars, it turns out there's a community of fans of the character. Recently, Cyfir met up with two, Shadow and Konohatu Lahamaras Kalantu (Kono). whom have their own Sonic-themed sim they share with fellow fans. So how did they bring their love of the blue speedster's adventures to Second Life? They had quite a bit to tell.