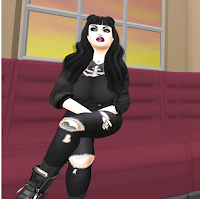 After eight years, one of the more popular Lindens, Xiola Linden, is departing Linden Lab. Coming in at a time the Lab had been distancing itself from the residents, Xiola has been quite a force in reversing that with events such as the Creepy Crawl and the "Lab Gab" show. The Newser wanted to interview her, but inworld was a problem as Lindens are busy. So we brought back an old style of interview, "Nine Questions." Xiola had a number of things to say, including how she came to Linden Lab and her future plans.

Read the interview in People.
Posted by Bixyl Shuftan at 6:04 AM