So soon after High Fidelity is about to all but shut down, another virtual world is in trouble. According to an article on Hypergrid Business, dated December 28, as well as some chatter on Discord, the Great Canadian Grid, a small Opensim world, has been taken offline.

The reason for the world being offline is apparently a personal dispute between it's owner Roddie Macchi and that of a larger virtual world, Digiworld's Terry Ford. Digiworld had been handling the smaller world's grid management services. Then somehow the two owners got into an argument of some kind, and the Great Canadian Grid was taken offline after these services were stopped. 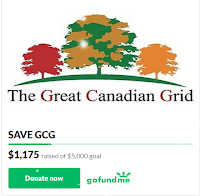 Macchi has reacted by starting a Gofundme campaign, which he says is to help pay for technical help and new services to restore the Great Canadian Grid.  As of the writing of this article, $1,175 USD had been raised.

There was no shortage of negative comments following the articles, as well in Discord. A few compared the Great Canadian Grid Gofundme to the InWorldz one over a year ago, which was unsuccessful in saving it. Some felt the incident not only made the two grid owners, but also Opensim as a whole, look bad, "It deeply saddens me it has come to this but it is our farewell to opensimulator altogether. My wife and I are heading back to our mainland parcel in Second Life ..." "... you complain that 'Why are people from Second Life not coming to you?' Coz you are terrible managers."