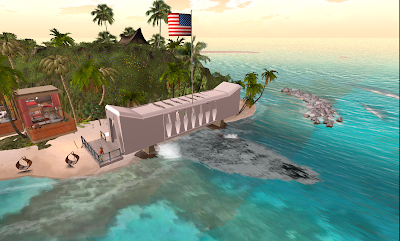 It was on this day seventy-eight years ago in which America, while debating whether or not to enter World War Two and attack Germany, found the war instead had come to it. At 7:48 Hawaii time, the US Military base at Pearl Harbor in Hawaii found itself under attack by over 350 planes from an Imperial Japanese carrier force. Four battleships were sunk, numerous other ships damaged, almost 200 aircraft destroyed (on the ground) and over 2300 American servicemen had been killed. More than half of those whom met their end that day had been stationed on the USS Arizona, from it's forward ammunition magazine exploding from an armor-piercing bomb. The other three battleships would be raised and brought back into action. But the Arizona was left as a memorial to it's crew. In 1962, a memorial was built over the ship. 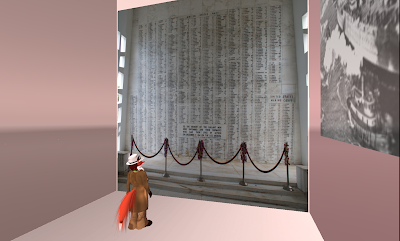 In Second Life at Oahu island, there is a replica of the USS Arizona Memorial. On board, one can sign a guest book, see pictures of the Arizona, and at the back see a list of those who perished on the battleship. Under the memorial, one can see the sunken ship.