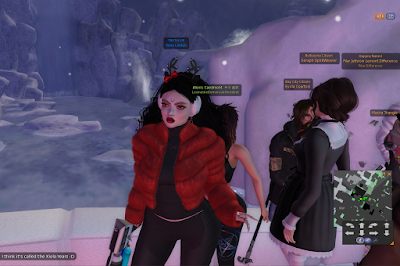 The Linden Snowball fight today from 10 to 11 SL time was lots of fun. But there was one sad moment. Near the end of the event, one of the Lindens taking part, Xiola Linden, told people she would soon be departing Linden Lab. Her last day will be January 3.

Xiola Linden was with Linden Lab's public relations, and one of the most familiar and popular Lindens, it not the most popular. She frequently appeared in many events with residents such as the Second Life Birthdays and the "Creepy Crawl" each Halloween. More recently, she started co-hosting the livestreamed show "Lab Gab" with Strawberry Linden. In the most recent episode on December 18, she also announced she was leaving (14:50). 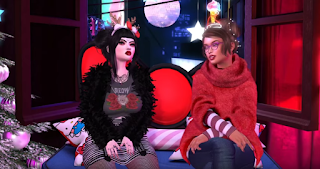 "Just a little over eight years ago was when I showed up for my first day at 'The Lab,' and I basically walked into my dream job. It was a place that I had for a very long time been a resident of since 2006. ... It's been a job that's allowed me to grow, and it's been a job that's been challenging. ... The product has it's challenges in terms of ... how do you explain Second Life to someone who's never done it because it's to many things to so many people on it. ... It's giving me a ton of incredible stories of things that you can not only imagine but realize. And I learned from the community to see the way that they continuously adopt the features of the platform and do it in ways that we never expecter or would do. So ... here we are eight years later and it's still my dream job. I still can't even imagine who I would be or what I would be like without this community and without Second Life and without the Lab.

"That said, it's come time for me to work on some new dreams. ... So yes, my last day at Linden Lab will be January 3rd. ... That's not to say I'm no longer gonna be in Second Life, because, you bet your bottom dollar ... I'm still going to be in Second Life, maybe even more so since I won't have to be doing it as a full-time job as well. I'll have more time to just come in and run amok. It's been awesome. In my time here, I've gotten a chance to work on so many products, not just Second Life obviously. I've been here for Sansar, for some of the other products we've had in our portfolio in the past. It's been awesome of course. Second Life is the dearest and nearest, and the one I have the most experience with.

"So yeah, that's my announcment. I should shut up before I start crying again."

Whereever you go Xiola, we all wish you the best of luck.