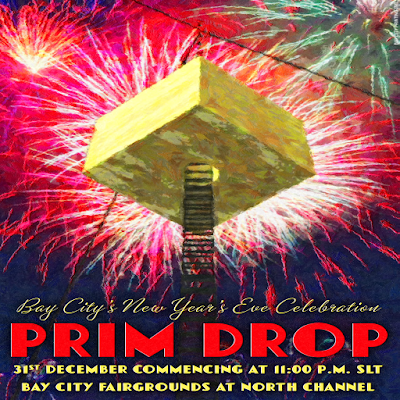 It's time for the prim to drop once more!

BAY CITY, SL (28th December, 2018) - Citizens of Bay City, Second Life's® city by the bay, will be marking the end of the year in fine fashion, attending the annual "Prim Drop" in the Bay city Fairgrounds in North Channel on the evening of the 31st of December.

The party will include an expanded, two-hour set of DJed tunes presented by Marianne McCann, as well as fireworks and other festive fun. Food, drink, and other party favors will be provided for all attendees.

The event is an outdoor, high-class, wintertime soirée, and black tie attire and/or full dress is requested. All Second Life® Residents are welcome to attend and ring in the New Year with the Bay City community.

This will also be the last event within Bay City this year for donating to Child's Play Charity (www.childsplaycharity.org). Child's Play is a 501c3 non profit organization offers online communities such as ours an opportunity to help seriously ill children around the globe during their hospital stays with the purchase of games and gaming equipment. To date, Bay City has raised over L$200,00 for Child's plaay this season.