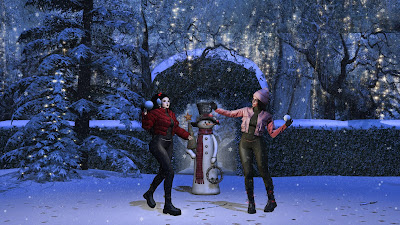 Have you wanted to toss a snowball at one of Linden Lab's finest? Well, tomorrow you're getting your chance. On the official Second Life blog yesterday, the Lab announced this month's Linden Snowball Fight.

Tis the season to let it go and get into some icy fun at the Winter Wonderland Snowball Fight Arena for some snow-slinging fun times!

Get your warm clothes and throwing arms ready - it’s time for a Lindens and Residents snowball fight! This Snowball Showdown means you're free to pelt your fellow Second Life Residents and Lindens with a bevy of sparkling snowballs- launched fresh from the snow-arsenal available at the arena.

The frozen frenzy will take place twice on Friday December 20. The first will be from 10 to 11 AM. The second will be from 2 to 3 PM. To get there, head to Portal Park, then look for the doorway with the Winter Wonderland sign. It is suggested that you get there early and have a good computer as the event will probably be crowded.