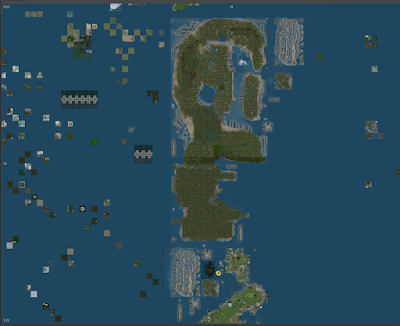 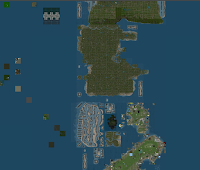 It's been a few months since we last talked about new areas in the Bellisseria continent. When I last dropped by in very early December, I hadn't noticed any major changes. But it seems since then, the Moles have been very busy.

The land that was originally planned for the south has finally been filled in. But the terraforming didn't stop there. The Moles made a huge extension to the south, dividing it from the north and central lands with a river. When the first land of the new continent was placed, while it was enabled to sail from the continent of Jeogeot to the south to it, it took a lot of ocean. Now just a couple sims separate the two continents.

Besides the continental expansion, a number of islands have also been placed. Some of these are for houseboats, including another "pickle" island. And there are various smaller islands which were placed for scenery.

Looking around, the new land not only had houses and houseboats, but some already had people inside. Looks like at least some of this new area has already been open for Premium residents to grab.

So what's next for Bellisseria? Hard to say. The Lab could easily make a new continent and/or houseboat islands to it's east. But the area has already attracted a number of residents whom have been banding together into a community. The new continent has been Linden Lab's biggest success this year. What they'll try for 2020, it'll be interesting to see.