People of the Year: The Moles 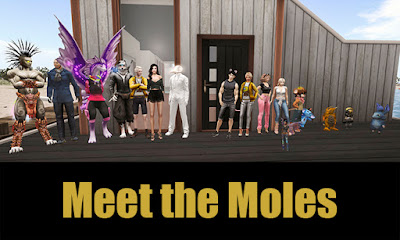 The Moles of Second Life, the residents of the Grid hired by Linden Lab to build and script things, haven't always gotten much notice. "The other blue dots" often went about unnoticed, though some residents did give them a friendly thank you for their efforts, notably the people of Bay City whom hold a "Mole Day" every February.

Most years, the Moles have a big project to take care of, recent ones being the Tyra and the Magical Glytches game and updating the Linden Realms game. But this year, they had their work cut out for them. Bellisseria, which had it's beginnings with the SSP landmass, has been nothing short of a massive undertaking with a lot of work done before it's opening in April. And they've continued to work at it, increasing it's landmass over time with details large and small. This included building and opening new Linden Homes, including the new camper homes in a campsite area. Sometimes they've been building with residents looking over their shoulders. And all this time, they've kept a sense of humor about it. The Moles' efforts didn't just build land, but the people whom moved into the new Linden homes came together into a new community, one that's been the scene of fun activities, and some beautiful shows. This month, what was probably Bellisseria's last major expansion was done. While perhaps there's a little more to do, what's been accomplished this year can only be called a great success.

For this, and keeping in mind their previous accomplishments, the Second Life Newser declares the Moles it's Second Life's 2019 Persons of the Year.

So what is it like being a mole, their interview at this year's "Meet the Lindens" events had a few details. (Click Here)