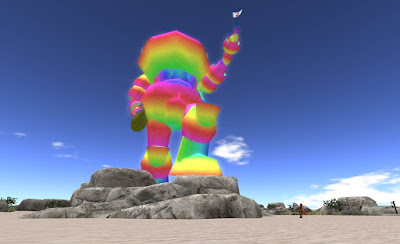 Going back to Costner Bay Island, the island in the Costner Bay, Whiskey Bay, and Ondine sims, I noticed some small changes such as a small outdoor workshop in one corner. But the most visible addition was an enormous statue of Magellan Linden, painted in rainbow colors, minus a green pickle it was holding.

The question of was the exploring Linden celebrating Pride Month . or had been zapped by unicorns was answered by taking a closeup, and seeing a "Second Pride" flag in his hand, the Second Life logo done in rainbow and on a white field. The statue was places by Abnor Mole, the flag by Naughty Mole. 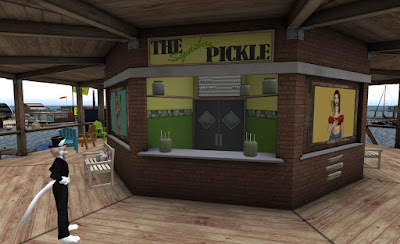 The object in the statue's hand wasn't the only pickle in the vicinity. Going to the houseboat area next to Bellisseria's northeast, I came across a community center with a number of picnic tables around a wooden building. Taking a closer look, the building was named "The Squishy Pickle."

There was a sign behind the counter "Menu: Pickle : 0L." With the lag, it looked for a moment like "U Pick : 0L." On the counters were a couple jars of pickles on sticks an avatar could click on, get one, and add/wear. There were also signs on the building of women with pickles and one picture of various Lindens and Moles with the pickles in hand.

So why is Linden Lab making a "big dill" over pickles at Bellisseria? Have they become fans of DJ Sheeba Metaluna and her "Flying Pickle Lounge"? Actually, there's a reason for the Lab's pickle joke, one that was explained in a chance encounter with one of the moles, the details which will be explained tomorrow.