"Game of Thrones" Author Appeared in Second Life in 2007


Last month, the longtime running fantasy drama "Game of Thrones" concluded after eight seasons. To those not familiar with the show, it had a darker and grittier feel than traditional fantasy stories, one person calling it a cross of "The Sopranos" and Middle Earth, due to the political intrigue in the stories. While many longtime fans disliked the final season, Rotten Tomatoes giving it a 55% rating compared to the 97% to 91% of the previous seven, there's no denying it's mass appeal over the years as well as it's impact on popular culture. 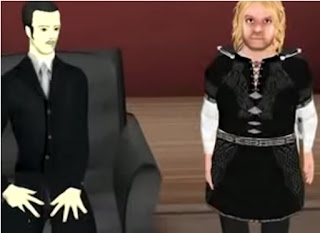 As it turns out, the writer of the "A Song of Ice and Fire" books the series was based on, George R.R. Martin, made an appearance in Second Life in May 2007. This was before the first season of the show had aired. Martin, whom was in an avatar based on his character Tyrion, was there to talk about his upcoming book "Dreamsongs," which was a collection of earlier works of his. The visit inworld was part of his campaign to publicize the work. But he also read an excerpt of the still unpublished fifth book of his "Ice and Fire" series, "A Dance With Dragons." The audience was a mix of human and nonhuman avatars, which Martin called a "strange-looking crowd." On his blog, he would call Second Life, "... well, sort of like World of Warcraft without the axes, swords, and monsters. Our world, kinda sorta, virtually. ... I've never done a reading with monsters in the audience before, at least not the sort you could tell my looking at 'em"

Besides part of the hour-long event appearing in a Youtube (there was another, but it was lost), there's a transcript of it on "The Citadel," a fan website of the show and stories. It's notable that "Dance of Dragons" wouldn't be published until July 2011, almost four years after the event. Someone remarked in the comments of the video, "So he has time to ponce about in sh***y online games to a motley assortment of furries and losers, but not write the damn book he was supposed to finish years ago?"

Martin talked some about writing, saying J.R. Tolkien was an inspiration of his. He also compared writing a novel to a cross-country trip. You know where you started, you know where you'll probably end, but you don't know where you'll be stopping for the night, and you might be taking detours here and there, "a lot of the fine details I discovered in the course of the writing."

There was also some discussion of the upcoming show on HBO, Martin saying the producers would be faithful to the books. There were some things spoken that looking back look funny or otherwise ironic, "I know it's taking longer than I thought, but I'm working on it guys, that's what I can say, I'm working on it. I'm going to have to stay ahead of David and Dan, it would be awfully embarrassing if the television series caught up with the book."

Martin still has yet to finish the final (planned) two novels of the series. As to what Martin thought of the ending of the TV series, you can read it here.