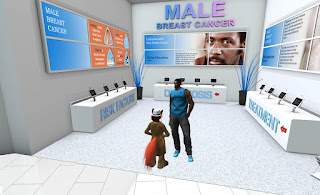 Cobalt Niles Hoffman (Cobalt Niles), the co-founder and vice-president of the Mu Sigma Nu SL Fraternity whom in March was raising awareness at kidney disease, is behind another health event in Second Life. He recently contacted me about an upcoming event this weekend, the 2019 Men's Health Awareness Expo.

JUNE is Men's Health Month! and in conjunction with many celebrations occurring across the country, our fraternity will
be launching a "2019 MEN'S HEALTH AWARENESS EXPO" in world. (Optional: and on FB) ***The goal of this event will be twofold:

ONE - To display Top Leading Information related to men's health, Its leading causes of death in men, and preventive measures. and,
TWO - To show thats there is a real and dynamic unity among second life men via their Greek organizations, working together in the spirit of true brotherhood. 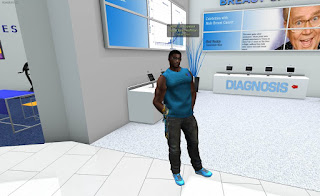 Colbalt told me that last month, he had been working to being other SL fraternities in the event, through Facebook and inworld, along with fraternity founder Gregorian Lytton and Trini Frequency. There are a number of booths looking at various health issues of men, such as heart disease, Alzheimer's, and diabetes. There was one of an illness that Cobalt felt men should be reminded they can get too: breast cancer. He felt men have a "misconception of ourselves" that this was a problem they didn't have to worry about when the facts were 2000 American men are diagnosed with breast cancer ever year and about a quarter of them die. Cobalt states because men don't check themselves or dismiss signs, they often don't find out until the disease has reached a late stage. 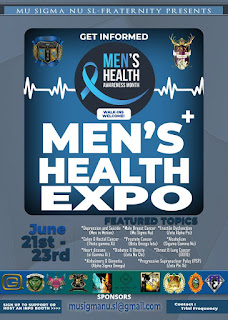 Of their kidney disease awareness event in March, Cobalt says they had raised $1200 US for the US Kidney Foundation. They had also gotten the attention of the Source Awards, whom nominated them for SL Fraternity of the Month for their fundraising work.

The event is scheduled to run from Friday June 21 at 6PM to Sunday June 23. Cobalt was telling me there was a chance it might be opened slightly earlier. But as they were still setting up booths, the area would remain closed to most until Friday.