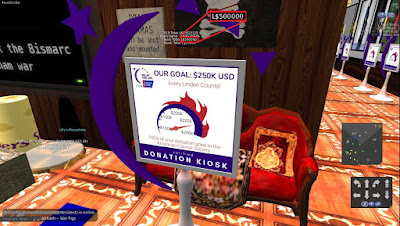 Although the Relay Weekend was two weeks ago, the last really big event of the Relay season, it wasn't the end of the fundraising season. For Team Sunbeamers, the last couple weeks have been a somewhat anxious question of would they reach Jade level, 500,000 Linden dollars this year, or not. The Relay Weekend resulted in enough donations to get them to 400,000 L. One person sent a donation by check to the Relay for Life in the name of the team on June 8 that would have covered the remaining cash to get to the next level. But the person needed to cash it in and give the Sunbeamer's credit was on vacation. So other people from in and out of the team began donating amounts large and small, including one at least 20,000 L. Finally at 6PM SL time, it was revealed the 500,000 Linden mark, and Jade level, was reached. 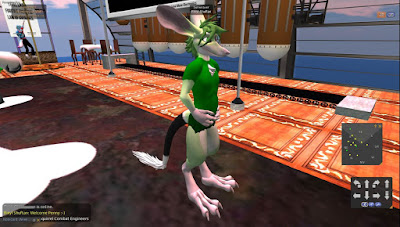 For the Sunbeamers, it was one of two crowning achievements, the other being it's campsite award, for 2019. Once again, "the little team that could," despite real life throwing two of it's key members curb balls, had come out with what can only be called a successful year. For yours truly, it was owning up to a challenge. I'd told everyone if we reached Jade, I'd be green for a week. And on that night, I was in the green bilby avatar a friend had christened "Bix Bilby," after "Incredible Hulk" actor Bill Bixby.

So what happens next year? Well, we'll see.