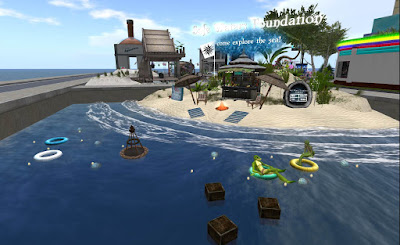 There's so many exhibits at the Second Life Birthday, we can't write about them all. But we can put the spotlight on a few. One is from the Safe Waters Foundation, a community of merfolk and their landwalking friends.

Tell your friends!  There be mermaids, mermen and sea creatures at the celebration event for SL's 16th year of existence (SLBD16)! Do come by to see our booth ... and check out the other displays.  Booth is incredibly well done by JJ Yowahoshi (Miss JJ).  Thanks  to Miss JJ and Celtic Infinity for all their hard work and talent. Hope you have a moment to drop in and admire our outreach to let people know - MER IS AN OPTION. 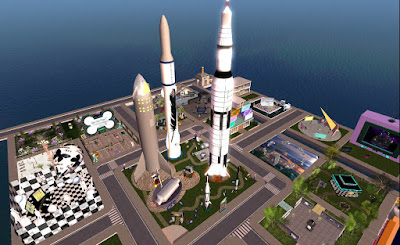 With the 50th anniversary of the Apollo 11 Moon Landing next month, it's fitting that there would be a "Back to the Moon" exhibit,  made by both the International Space Museum and National Space Society.

From the era of sock hops and the Space Age, to a possible future a short 16 years from now, the International Spaceflight Museum and the National Space Society invite you “Back to the Moon!” in a tribute to the 50th Anniversary of Apollo 11.

While getting a man to the Moon became science fact in 1969, in the 50s, it was still very much science-fiction. Part of the exhibit is a nod to how people in the 50s imagined the trip. Another part examines how in the near future we won't be just returning, but making a base there. 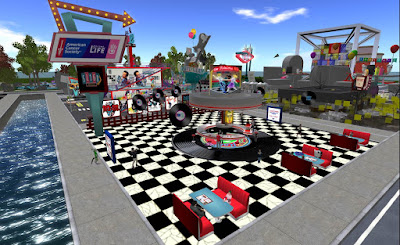 With the Relay for Life in Second Life having just concluded it's fundraising season, it's fans will appreciate it's own exhibit at the Second Life Birthday. This build by Eclair Martinek resembles the inside of a 50s diner.


Probably the most important development in the 1950s in the fight against cancer was that the link between cigarettes and lung cancer was clearly established in 1950.

Be sure to visit these, and other exhibits, at the Second Life Birthday