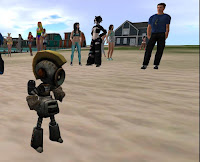 They're the occasionally celebrated but often overlooked workers of Linden Lab: the moles. Hired from Second Life's population of residents, they build Linden Lab's infrastructure, and sometimes help out with events. Recently, a tip from a friend of the Newser led to a chance encounter with Abnor Mole while he was working on Bellisseria's new Linden Home area. As there was a crowd watching, some questions were asked, and the mole with the small robot avatar took a little time to answer. He also volunteered some information as to the source of the Lab's pickle jokes in the area.

Read the story in Extra.
Posted by Bixyl Shuftan at 6:04 AM