Update on Bellisseria For Mid-August 2019 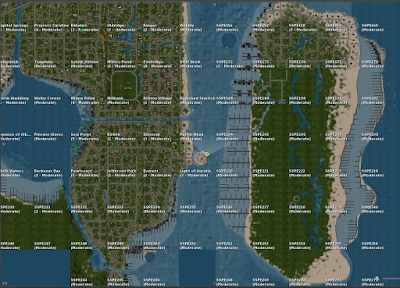 It's been about a year since the "SSP" landmass first appeared on the map.  In April, the real new continent appeared on the Grid, and became known as Bellisseria. Since then, the moles have continued to work on and expand both the land, and build the Linden homes on them. In early June came an island that would become it's community center.

Since then, the work on Bellisseria continues. More of the continent's southeast landmass has been built, and a second "pickle" island has been added off the coast to the southeast, to go with the "squishy pickle" to the northeast.

And as the land has been developed, the roads, piers, and Linden Homes aren't too far behind. The land ones initially appear as green shapes, then take familiar form with green fields around them and orange squares on top. There's also what looks like coding over the homes, both the land homes and houseboats.

When someone asked on the forums how long does it take the Lab to make the homes, Quartz Linden answered:

Each region in Bellissaria is unique,  designed and laid out individually.   When we make new regions to add to Bellissaria, we start with a completely new one, flat as pool table and completely featureless.    Each one needs terraforming and dividing up into parcels, and roads laying,  and slips for the boats, and then decorating with trees, flowers, rocks, fences and whatever else for the parcels and then some general landscaping on the remaining LDPW land plus some community areas building here and there.

That's all done by teams of LDPW Moles, working together, and pretty much flat out.    It involves several passes, and several QA inspections at different stages in the process. That's what takes the time,  and it's because the terraforming and decorating is done with such care and attention to detail that the regions look as good as they do.

... everything we put out on a region is made and scripted by LDPW Moles, and those of us who work primarily in content creation for Bellissaria rather than setting up the regions are already well advanced into creating items for future themes.

There was one build on the southeast island that got my attention. In the middle of the place were three towers that bore a resemblance to a nuclear reactor. Just what the towers are for can only be speculated on at this point.

As the land continues to grow, the people making the continent their virtual home and their friends have formed a community that continues to do well. It's not just human avatars, but also furs, ferals, and others. The Bellisserians channel on Discord has numerous entries every day, and brings attention to places such as the Belli's Blues Cafe (left). Creative residents have been making add-ons to Linden Homes, such as pools, porches, sheds, and more.

Daniel Voyager predicted the continent's land would be completed before Spring 2020. He very well may be right. We'll report more on the continent as things develop.

Note: I tried getting a good picture of the map showing Bellisseria in relation to nearby continents. But something kept the sims from view when smaller than shown on the picture, and even then many of the sims would vanish after a few seconds.
Posted by Bixyl Shuftan at 6:02 AM