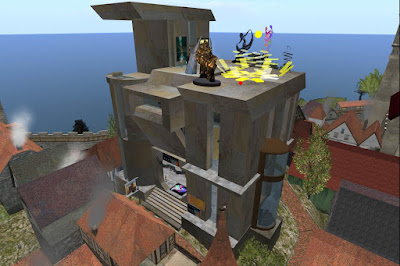 On Saturday August 3, there was a party at the Museum of Contemporary Art in the Confederation of Democratic Simulators. The event was to celebrate a new exhibit there. The event was from Noon to 2PM SL time. DJ Lyubov played the music.

Thanks to a power outage, yours truly couldn't be at the opening of Kyoko's exhibit on Sunday, though I was able to drop by later. InterstellART is described as "dedicated to interstellar cyber art," and is maintained by self-described "cyber-artist" Asmita Duranjaya. Kyoko's art there can be found at Nice Atoll (123/220/1080) .