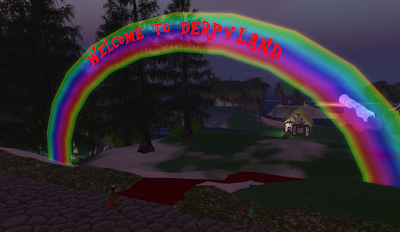 Some sad news for pony fans. The Derpyland sim has closed down. It went offline sometime today, Saturday August 24 being the last full day it was online.

Talking to Amehana Arashi, she told me the sim owner has been having money troubles for some time, and last month the tier had been paid for him by a friend. "We had tried in private to help him find ways to keep it up," she explained, saying nostalgia was the big reason the sim remained up for as long as it has, "... but this just couldn't continue." She did say there was an offer made to rebuild part of the sim in Trotsdale.

Derpyland was up for about eight years, and boasted an amusement park with rides, shops, and a club with a karaoke bar. The latter had events up to a couple nights ago. Ironically, checking out the sim last night, the roller coaster was on fire as if an omen about the sim's future.

While there are some pony sims left, the end of Derpyland means no others are next to Trotsdale.

In real life media, this is the last year the "My Little Pony: Friendship is Magic" cartoon has a new season, the show coming to an end after nine seasons.

Addition: Amehana has requested that any inquiries as to if Derpyland will be renting the parcels offered in Trotsdale go to Shippo849 Resident (Dashy), "It's in Shippo's hands to decide to accept the offer or not."

Posted by Bixyl Shuftan at 1:00 PM