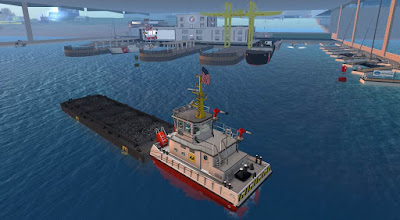 Remember the "Get The Freight Out" game that was a big hit last year? To those who don't know, it's a HUD-based game in which one uses a compatible vehicle to ship frieght over land, sea, or air from one destination in Second Life to another. For successful runs, players get experience points to level up as well as in-game cash. While the points and cash are certainly an incentive, for many players however, the best thing is the journey as they see many places in Second Life they otherwise wouldn't, some they've never seen before.

Among those who've been playing the game is co-manger of the Happy Vixen, Skylark "Snowbuns" Lefavre. She prefers shipping by sea. In the past, she used some sleek and fast watercraft. So it was something of a surprise when she recently got this tugboat for the game, which comes with a barge that it can push around. She and her first mate Nikkita invited me to sit around on one of their shipping runs.

Compared to some of the other boats they've used, the tug isn't very sleek or glamorous. And it's steering can be very slow. But it gets the job done. On this run, Snowy and Nikki made their run in time and got their in-game currency.

Along the way, they saw another tugboat going about. It was the same kind as theirs, with the barge in operation. So it seems not only does the game still have some other players, but this particular water craft seems to "tug" the interest of others.