Announcement From The Creator of Hangars Liquides 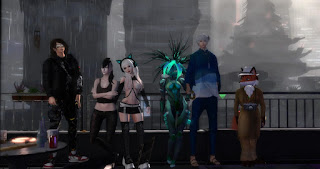 It was late last month that the Hangars Liquides cyberpunk city sims, which were in danger of closing weeks ago, were declared safe by creator and owner Djehan Kidd. Since then, the crowdfunder continued to take in more money, as of the writing of this article, it's gone up to over $4000 USD raised. Djehan would also invite several of her supporters over for a picture (she invited me to join in when I dropped by to take one of my own).

Yesterday on August 4, Djehan offered the following statement in the Hangars group, saying she was going to take a short break, thanking her supporters again, and talked a little about how the perks offered to those who donated the most would be given out.

The fundraiser stopped, we raised EUR 3682.
Minus the fees taken by the various intermediaries (indiegogo, banks, etc) the "Estimated Upcoming Disbursement" is of €3,157.00 EUR.

However this is enough to pay Linden Lab now, so we are undergoing administrative work the next few days to proceed to the transfers under our government recognized 501 C status, all our activities are monitored and the wire transfer will be made from a bank account that is thoroughly AML-KYC verified by the bank and indiegogo too.

Most people who made donations sent me messages that they donated to the non profit organization to save the city and don't want to ask for more than just me keeping the city online and running. But I intend to do anything I can, all benefactors will get special gifts, including my next commercial project release (which is what I stopped working on and I will resume work very soon, hopefully) and I will make a special group for the Hangars Liquides benefactors that will give special rights like rez rights within the city to create their own immersive environment.

Please note that if you are a builder or a scripter, texture artist, etc, who gave to the fundraiser I will be more than happy to provide you with a special creator space as part of the mission of the non profit to help create, promote and diffuse any type of art, we always did this, for instance with JC Hill, DIVE, KROVA, N3k0T3ch, and more. We will create more gallery or studio spaces too, for the artists present already you know who you are (smile). All other creators can feel free to contact me, whether they gave to the fundraiser or not, we will allocate spaces for free as much as sims resources go, like we always did.

I have put all my work on hold to save the city. Staying on the computer 15 hours a day 7 days a week since a month at possibly the timezones of the entire planet all at once (right before it was only 10 hours a day and 5 hours a day the weekend, for my normal work, and I could sleep at normal night time too). 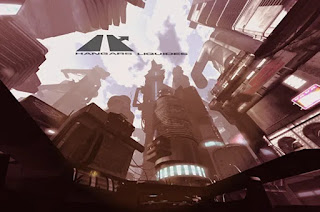 Please bear with me as we are now finalizing all this, afterwards I will need to take a few days off for obvious health reasons, to avoid any possible burnout and eventually be able to resume working on my actual project that is not part of the non profit and pays for RL food, bills and taxes.

I could be able to keep going at that pace but I am an intensive worker with a long experience now and I know that if I don't take a few days off, it will threaten my health, both physical and mental. So next week I will probably go away from computer and home for the week, I will enable the IM to email option of course. My laptop's screen is completely broken so I will not be able to access SL for a few days.

As far as the future goes, I am very confident and I think that I will be able to keep the city running. What happened now was a downtime, I think everyone has them, so there you go, me too. This is only a transitional time, and I know that things are going to get back on track, and rather fast.

If everything goes well, as planned, all the benefactors will always keep privileges at HL in the future. I have been so touched and humbled, and you know, working for a non profit, you have to be wired this way, in the brain, and this is how I am.

Anyways now you have a better look of the intensity of the efforts made behind the scenes in order to build all these things, from scratch in both the financial and artistic aspects, from zero.

So the perks if you want to claim yours will be on the 3 HL regions as creative spaces, not on cell or china as simple rentals.

Have a nice day everyone and so rest assured even if I take a few days off next week Ill be back fairly fast.

This may or may not be the last big announcement concerning Hangar's recent crisis. And there will need to be efforts in the future to keep the sims funded. But for now, Djehan will be taking a needed rest.