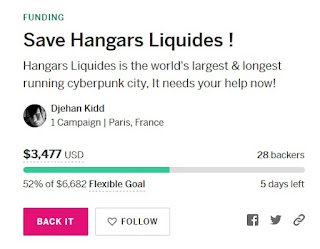 On Saturday night, July 27 at 6:51 PM, Djehan Kidd announced that enough money had been raised in her crowdfunder to keep the Hangars Liquides cyberpunk city sim up and running past the end of July, when payments needed to be made.

That's it! THE SERVERS WILL KEEP RUNNING on August 1st ! YAR!

Wow, so, 'Id like every donor, from the fundraiser AND from SL, to write to me in the next 24 hours so we can make a group picture because I think everyone is happy we could make it, couldn't we?!

There is still way to go, you can still donate! But the very emergency is over!

The amount raised by then was $3477, of 52% of the $6682 goal for the fundraiser. Djehan had stated 50% of the crowdfunder goal was what was needed to pay for the sims before time was up at a minute after Midnight on August 1.

Chatting with Djehan, she was breathing a sign of relief. "Now, I can sort out much easier, august 1st was a real emergency. Everything will be spent on server space, but the invoice date was August 1st. This invoice is 3K so yes. ... such happiness, this is such a community thing, it is amazing! As a non profit, it's a big thing, to see we can still have community stuff like that."

"I really am grateful and very humbled, super touched in the heart (smile)."

Hangars Liquides has been in Second Life for over 12 years. It ran into trouble when Linden Lab stated that it couldn't keep it's nonprofit discount while renting out apartments for those wanting housing on the sims.