Eye On The Blog: "#Apollo50th #SecondLifeChallenge" 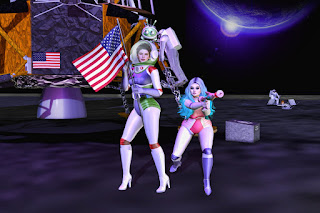 It was fifty years ago this week that the Apollo 11 rocket launched, and on July 20 that year two of it's astronauts would walk on the moon. Various places and groups in Second Life are having celebration events, such as the National Space Society. Linden Lab is getting in on the events by inviting people to take part in their latest "hashtag SecondLifeChallenge" event, "#Apollo50th," which Xiola Linden posted about yesterday.

Today marks the 50th anniversary of the Apollo 11 moon launch! Four days later, mankind touched down on the moon's surface and  "That's one small step for man, one giant leap for mankind." was born! We wanted to celebrate the momentous occasion with a #SecondLifeChallenge

To take part, the Lab is asking residents to take screenshots and/or videos of themselves and/or friends exploring outer space locations. You then share the picture on social media "using the hashtags #Apollo50th, #Apollo50, #Apollo11,  and #SecondLifeChallenge," as well as posting on Flickr. Of the Flickr pictures, "using the hashtags #Apollo50th and #SecondLifeChallenge ," you submit them to two Second Life Flickr groups, Second Life Official, and Second Life Challenge - Official.

The Lab is offering no prizes, nor is there any competition.

The blog post would also mention the National Space Society's celebration of the Moon Landing tomorrow, Saturday July 20, and the International Spaceflight Museum.