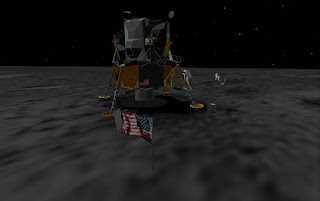 Celebrate the 50th anniversary of Apollo 11’s first first landing of humankind on the Moon. Join us at our Tranquility Base venue on Saturday, July 20th, for two historic video watch parties, and a Space Age Sock Hop with DJ Aristippus (details below).

We will gather at Tranquility Base at 1pm SL time ahead of the landing time, and again at 7:30pm SL time in advance of the first steps on the Moon, where we will watch the videos and discuss the past, present and future of space exploration and development. You can view these videos on our screens or in your browser any time, but the information below will allow you to sync with the timing of the historic events.

You can also watch and listen to:
“Hope Eyrie” (The Eagle Has Landed) - anthem of the Space Age
Performed by Julia Ecklar, written by Leslie Fish, video edited by Per Malm
https://www.youtube.com/watch?v=7cVOOXQo22o

Join us at Tranquility Base (see landmark above) for some songs with a space theme, some that come from the Moon landing era, and a whole lot of classic rock and roll. Costumes not required, but we encourage spacesuits or period sock hop outfits. Freebie classic avatar spacesuits available!

Aristippus, The Sexy Dj, has been DJing for many years. He mostly plays songs that he has uploaded from his personal collection of vinyl LPs and 45s. He is an original Baby Boomer, born in Year 1 of that generation. As such on Oct. 4, 1957, he was almost 11 years old when Sputnik went up, ushering in the age of space exploration.


For more information on the Apollo 11 mission:


Check out the Apollo 11 exhibit at the Neil A. Armstrong Library and Archives here:

Listen to our Moon Music playlist through the end of July:

We are the in-world presence of the National Space Society, an international organization of like-minded people, from the interested public to grassroots activists to astronauts and space scientists.

Welcome to the International Spaceflight Museum! We strive to create full-scale, accurate models of rockets and other spacecraft, and present astronomical information in an interactive, accessible way. This museum was started in late 2005, and has been at the present location on Spaceport Alpha since early 2006.

http://ismuseum.org
Posted by Bixyl Shuftan at 6:01 AM