With so much going on in Second Life, it's easy to miss what's going on with other virtual worlds. But there have been reports that one particular one that a number of residents have heard of has been having serious troubles: High Fidelity.

For those of you not familiar with the virtual world, after Philip Rosedale, the founder of Linden Lab, left the company, he went on to found High Fidelity in 2013. Despite having raised over seventy million from investors, it hasn't been doing well. In a community meeting in early April, Rosedale had some bad news. All company owned domains in the virtual world would be shut down, except for the orientation room for new users, and instead of focusing on VR headset experiences they would be concentrating on those from desktop computers. The reason for the latter was slow VR equipment sales. Hamlet Au remarked, "I can't emphasize enough how huge a blow this is to social VR and consumer-facing VR in general." In May came another announcement, a quarter of the workers would be laid off. The company would also be changing it's direction more to businesses. 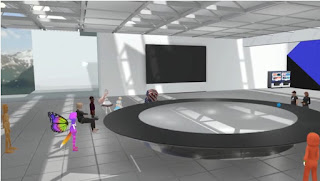 As part of the changes in April, the General Assembly meetings were replayed with monthly Developers Discussion. When blogger Ryan Schultz looked at the video for the June discussion, he noticed a significant drop in attendance compared to the April meeting. "what happened to all the people who were active supporters of High Fidelity and who used to come out to meetings?" he asked. He then noticed on the forums some longtime members had their "trusted member" status downgraded to standard, which did not sit well with some, "Wow, after being here for 5+ years, I guess I never was trusted at all." Schultz's reaction was, "Is it just me, or is there a general overall sense of HiFi turning off the lights, shutting down various systems, and in general just downgrading services to their loyal userbase?"

If those weren't enough signs of trouble, in late May High Fidelity began offering it's office in San Francisco up for rent. All of this point to signs that of a company, and virtual world, in jeopardy. The name of Schults's blog post "Rearranging the deck chairs on the Titanic" might have been a pessimistic assessment, but hardly unjustified. Despite Philip Rosedale's success with Linden Lab and Second Life, he's been unable to recreate it with his new company and virtual world, leading one to comment, "Second Life must have been a strange anomaly, that neither its founders nor the current Linden Lab appear able to replicate."