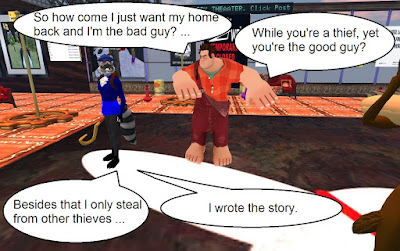 Taken at Club Cutlass' "Toon Time." "Wreck-It-Ralph" as the "bad guy" in his video game is a sympathetic one when you think about it. His home, a stump in the woods, is uprooted to make way for an apartment complex. And the impulsive guy that he is, vents his fists at the source of his problem. Sly Cooper may be technically breaking the law in his heists, but that be steals only from other thieves *and* would rather avoid violence, makes him the hero of his game. Fortunately in Ralph's movie, everything turns out well for him in the end.