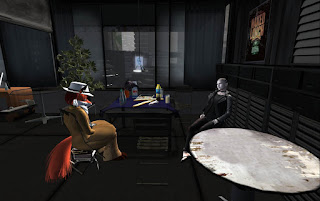 Last Friday, the Newser reported on the five region Hangars Liquides urban sci-fi sims in danger of being shut down at the end of the month. This weekend, I had a few words with the builder and owner Djehan Kidd about the area, and it's situation.

Djehan told me it's looking unlikely Linden Lab will allow Hangars to rent out apartments and still remain a nonprofit. She felt it's not because they don't want to, but in her opinion they're "monitored" by the US Government more today than in the past. She's also gotten numerous offers of help to keep the sims afloat. But she feels their best chance lies with the Lab's sim preservation program, "So far I didn't get a no or a yes. All I know is that a commitee will visit (the sims) and decide." 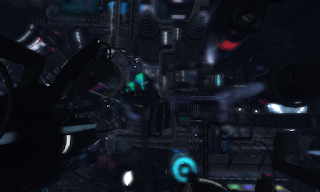 Meanwhile, others are spreading the word about the sims. A concerned resident created a thread on the official forums about Hangars Liquides, and it quickly grew to numerous pages, some people posting pictures of the area. There were numerous pleas for the sims to be given a break and allowed to stay on. One commented, "I don't think I have been there before or if I had I didn't spend long there because the scale of it whilst immersive is also bewildering. Spent 30 minutes exploring it again and it is undoubtedly a work of art. Despite all its complexity it is well optimised, I had none of my usual problems with textures and objects not bothering to load. It is a fine example of what is possible to do here."

There's also a Flickr page full of screenshots of the sims (caution, not all safe for work).

The full interview with Djehan will appear later this week in the Newser.