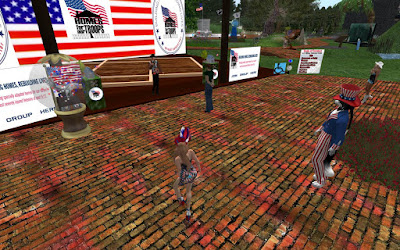 On Sunday June 20, Veterans Isle was the scene of their monthly concert. Organized in part by Frets Nirvana, the event raises funds for Homes For Our Troops.

This week is the one where we celebrate the founding of our country.  And we are kicking the week off with our Homes For Our Troops benefit.  Waya Snowpaw  is going to kick off the benefit for those who have sacrificed so much for the freedom that this country gives all of us.  Come on out and kick your July 4 week off the right way ...helping extremely wounded veterans who volunteered to protect our freedom.

After Waya was Essence Bilasimo from 5-6 PM. Next was Waye Rhodell from 6- 7 PM. Then came Wolfie Starfire from 7- 8 PM. Finally, Bella finished things off feom 8-9 PM. As the performers made music, money was collected in two kiosks on either side of the stage. Also, there was a snowglobe people couls cluck and get a copy of.

I had a talk with Waya after the event. He stated that during the event, one of the kiosks had been accidentally reset. The real total raised was probably about 225,000 Linden dollars raised. Waya would also tell me he made the snowglobe, "Wanted to make a little pressie for the 4th of July. ... That little house is based off a Frank Lloyd Wright Craftsman style. You can even see a bit of his style of stained glass windows if you look around the door frame."

Veterans Isle holds the concerts about once a month, usually on the last Sunday of the month.