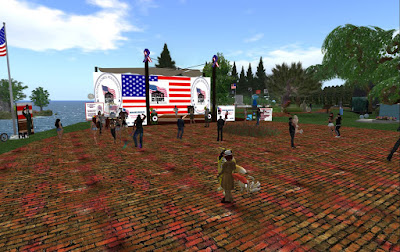 On Sunday Night, July 29, Veterans Isle was the scene of it's monthly charity concert for Homes For Our Troops. Four live musicians and one DJ performed music for the crowd during the five hour event, which went from 4 to 9PM SL time. The event was organized in part by guitarist Frets Nirvana.

Tonight’s the night folks!  Get away from the heat outside …but heat it up at our monthly benefit for Homes For Our Troops.    We are going to have some fun tonight …and help those who have sacrificed so much for our freedom.

DJ Waya Snowpaw started things up at 4PM. At 5, Ang Gustafson took to the stage. 6PM was Erika Ordinary, giving a performance that the crowd thought was anything but. At 7PM, the audience was howling for Wolfie Starfire. Last but not least at 8PM, Savana Coronet finished off the event.

The fundraiser brought in 125,350 Linden dollars, most of it in the final two hours.

To learn more about Homes for Our Troops visit https://www.hfotusa.org
Posted by Bixyl Shuftan at 6:01 AM