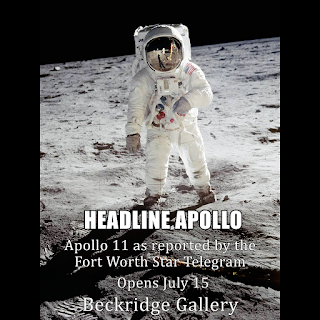 July 15 thru July 28, 2019 at The Beckridge Gallery, Bellesseria, Second Life
Free and open to the public

The 50th anniversary of the Apollo 11 moon mission has brought forth numerous books, films, and exhibits that offer different perspectives on this unique human achievement. In this vein, the "Headline Apollo" exhibit presents what the readers of a north Texas newspaper saw over this 10 day period in July, 1969. A newspaper of that era covered this history making mission with great detail and emphasis, but simultaneously reported on other issues of the day, such as Vietnam, Chappaquiddick, Luna 15, Nixon, hospital taxes, local crime, and baby names.

The exhibit also includes NASA archival photos of the mission, magazine covers, and a tip of the hat to the first visit to the moon by humans, Apollo 8.

The newspapers presented in "Headline Apollo" (except for July 21 morning) were collected and archived in 1969 by a young diamond Marchant and photographed in 2019.

The Beckridge Gallery of Bellesseria, Second Life is a small indoor gallery that hosts one exhibit at a time. Exhibit topics include art, science, and history and may concern the real world as well as Second Life activities.

diamond Marchant
diamond.marchant.sl@gmail.com
Posted by Bixyl Shuftan at 6:01 AM