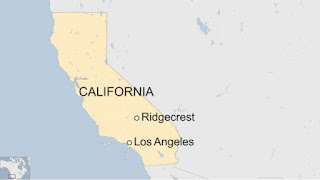 Twice in two days, California was hit by two strong earthquakes. On Thursday July 4, a 6.4 quake hit near the town of Ridgecrest, a town about 150 miles northeast of Los Angeles. This was followed by a more powerful quake, a 7.1, also near Ridgecrest but about ten miles away.There are numerous reports of fires and minor injuries. But no one seems to have been seriously hurt so far.

The second earthquake was felt as far away as Los Angeles and Las Vegas Nevada, and was the strongest in the state in about twenty years. There have been a total of 2000 aftershocks of both quakes. Ridgecrest has about 29,000 residents and is near the Naval Air Weapons China Lake facility, which has been closed pending inspections.

The events were the subject of numerous talk and discussion in Second Life groups and SL Discord servers, from concerns that the virtual world might be disrupted to well-wishes to residents in California.