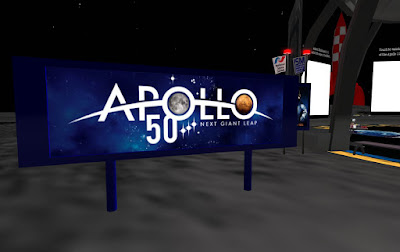 Saturday August 20 was a big day for space fans. It was the 50th anniversary of the Apollo 11 Moon Landing, the first time in human history Man had set foot on a place other than Earth. A number of  places in Second Life had events to celebrate the occasion. Among them was the National Space Society sim, owned by the National Space Society in Second Life. 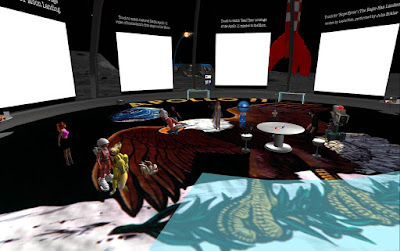 At their Tranquility Base area high over the sim, a number or people celebrated with a "Sock Hop." On display were pictures, and one could see videos of the event.

At this event, and others, a number of people talked about the landing and it's significance. One person had basically lost hope that we'd return withing his lifetime. But most whom expressed an opinion felt we'd be back, eventually. It was pretty much agreed this was an event that would continued to be talked about for ages to come.

For those wanting to see "real time" footage of the event, check out this website: https://apolloinrealtime.org/11/