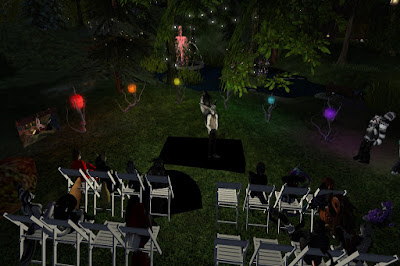 July 27, 2019 at 6PM SLT a memorial was held at Rocket City Community on Rocket City sim for Lacy Musketeer who had passed away earlier this week from an apparent heart attack. Upwards of 45 avatars came many who stood and recounted tales of knowing her and the things they did. 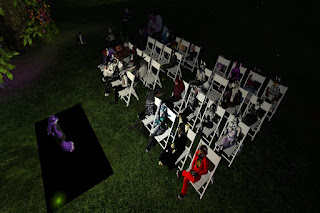 The sim was set to night time as Koterie Itoku stated "*Once I heard the news that she had passed, I immediately rushed over here and dropped the sun down as low as I could*". "*The reason for that, is she and I always had a thing where she would try to always leave the sim dark because she liked it when the sun was down, and I very much different. And it was always a thing. I felt like, okay Lacy, you can win one last time.*"

Some choose to use voice instead of typing. Other people such as Oscelot Haalan transcribed for the non-voice using. Thus no one missed most of what was said. During this lag became a factor to some and just getting to the speaking platform was a challenge but it did not stop them from what they had to say. The event lasted an hour and a half with several people sharing and poem reading. Lacy Musketeer will be missed by many and certainly not forgotten.