"Board of Directors" Added to Lindenlab.com's About Page 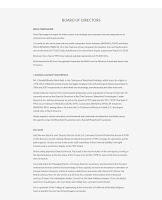 There's been a change at the bottom of the "About" page of Linden Lab's website. In addition to nine of Linden Lab's senior staff, at the bottom has been added "Board of Directors." There are three people listed there, Brad Overwager and Randall Waterfield, the two leaders of the investment group that acquired Linden Lab, and Raj Date.

Brad Oberwager has spent his entire career in technology and consumer focused companies as an entrepreneur and board member.

Currently, he sits on the board of two public companies, Asure Software (NASDAQ: ASUR) and Better World (NASDAQ: BWACU). He is the chairman of two companies he founded, Jyve and Sundia and is also on the board of TEGSCO (aka AutoReturn). He owned Bare Snacks, acquired by PepsiCo in 2018.

Brad was Vice-chair of YPO International, a global organization of 25,000 CEOs.

Brad received his BS from Georgetown University, his MBA from the Wharton School and lives in San Francisco.

Mr. J. Randall (Randy) Waterfield, is the Chairman of Waterfield Holdings, which traces its origins to 1928. After selling the largest private mortgage company in the US and largest Indiana based bank in 2006 and 2007 respectively, he diversified into technology, manufacturing and other industries.

Randy holds the Chartered Financial Analyst designation and is a graduate of Harvard University. He currently serves on the Board of Directors of Red Oak Partners, Waterfield Technologies, Linden Research, Inc. and has previously served on the boards of YPO (and was the 2017-2018 Chairman of YPO), Asure Software ( NASDAQ: ASUR), SMTC Corporation (NASDAQ: SMTX), RF Industries (NASDAQ: RFIL), among others. He is also the Co-Chairman of Missouri Cobalt, LLC, the largest cobalt mine in North America.

Raj Date was the first-ever Deputy Director of the U.S. Consumer Financial Protection Bureau (CFPB). As the Bureau’s second-ranking official, he helped steward the CFPB’s strategy, its operations, and its policy agenda. He also served on the senior staff committee of the Financial Stability Oversight Council, and as a statutory deputy to the FDIC Board.

Before being appointed Deputy Director, Raj acted as the interim leader of the new agency, serving as the Special Advisor to the Secretary of the Treasury. He led the CFPB for most of the first six months after its launch.

Currently, Raj is the Managing Partner of Fenway Summer, an advisory and investment firm focused on financial services and financial technology. In that capacity, he chairs the investment committee of Fenway Summer Ventures, a fintech venture capital fund, and works with clients of FS Vector, the fintech advisory firm. He also serves as a Director for a number of innovative firms in financial services: Prosper, the marketplace lender; Green Dot, the bank holding company; Circle, the digital asset firm; Grasshopper, a de novo bank; and College Ave, a private student lender.

The Consumer Financial Protection Bureau came about in 2011 as a response to the financial crisis of 2008. Before Fate joined it, he was a senior vice-president at Captal One and as a managing director at Deutsche Bank. He was also on the Board of Directors of Prosper Marketplace. He left banking work in 2009, and started the Cambridge Winter Center, which was "devoted to promoting the regulation of financial firms." His being apointed Deputy Director of the CFPB came with some controversy as it was reported that he was active in the discussions over the the Dodd–Frank Wall Street Reform and Consumer Protection Act, which led to the CFPB's creation. But he "was never found to be in violation of any laws and he had always recused himself from rule-making regarding peer-to-peer lending." It was after he left the Bureau he founded Fenway Summer.

More on Oberwager and Waterfield can be read in our first article about the acquisition.