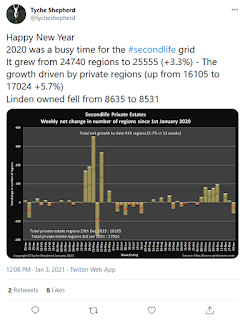 When Linden Lab announced last May that they were could no longer guarantee a new sim to everyone who wanted to buy one, it was obvious the amount of private land areas was going up. It was just a question of how much. On January 3, Tyche Shepherd announced just how much it had. The total number of sims had increased from 24,740 to 25,555, an increase of 3.3%. For private sims, the rate of growth was a little short of twice that. They grew in number from 16,105 to 17,024, an increase of 919 or 5.7%.

So what will happen in 2021? Presumably once the bugs are worked out with Linden Lab's move to Amazon Cloud servers and anyone can get a private sim when they want, their numbers will continue to grow. But if glitches cause them to keep new land purchases limited, the increase will be small.

Posted by Bixyl Shuftan at 3:01 PM