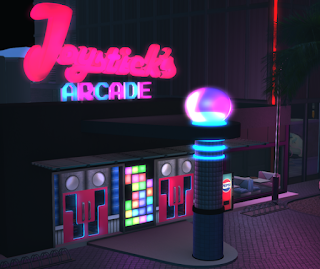 In May 2019, the Newser wrote about Palmwood City, "a thriving furry Second Life community themed around a 'retrowave' city aesthetic." Sadly, we were just informed Palmwood will soon be closing down. Jimmy Talon stated the following:

I know this may not be the most shocking thing to hear given how quiet things have been for a while now but still having to put it in writing officially does give it some weight.

To put it plainly I do not want to run this project any more. It requires a lot of time, effort, energy, and patience that I have not possessed for a few years now. Not only that but the fluctuating costs of adding expansions, updating buildings, and maintaining a strong presence in Second Life can sometimes be too much for a guy who doesn't have alot of spare money to begin with. Palmwood has always sustained on a break even business model which can only stay good for so long before things just add up and people lose interest.

I’m glad I’ve been able to make friends and meet cool people through this project over the years but I’ve been less and less active in Second Life as the years have gone by due to work, school, and also just simply not relying on it for a bulk of my social life as I did when I was younger.
Much of this is coming from personal reasons. It's not a project that excites me anymore and I’ve sadly just lost all passion and aspiration for it. But even then the technical issues have also begun to show their ugly head as years have gone by. Things I could have done better, things I just didn’t think were important at the time but definitely were, etc. Palmwood was always kind of a pretty sim first and everything else an afterthought. That only gets you so far.

I’m sure it would be possible to find help and get things running in a positive direction again before turning in my keys. Sadly that won’t happen overnight and would require me to stay invested in the project for an indefinite amount of time longer before turning it over to a person or group who may or may not stick with it and that just seems like it would be more borrowed time from my perspective.

So on January 16th, 2021, we will no longer accept money for the remaining rentals in Palmwood and let the sim be re-claimed by the covenant its hosted by.

I’m sorry to everyone this comes as sad news to. All good things come to an end sometime.

Jimmy did say he was "working on a smaller, more manageable and less involved project in the spirit of Palmwood" with the help of some fans, "Thank you for almost 5 long years of fun. It’s been a ride."