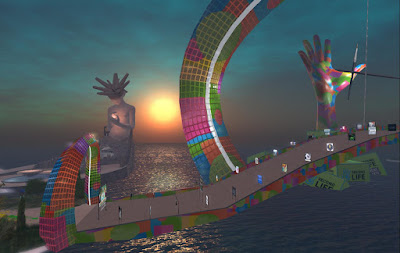 The first sims up the Second Life Endowment of the Arts, or SLEA, are up and accessible. The news was announced on the official blog earlier this week.

The Second Life Endowment for the Arts, in partnership with Linden Lab, launched January 1st, 2021. The new initiative, originally announced in September, provides an opportunity for artists to apply for use of grid space to create artistic experiences in Second Life while also promoting the overall virtual arts community in SL.

The SLEA, which is the spiritual successor to the former Linden Endowment for the Arts (LEA), bears a colorful aesthetic that is part university courtyard and part amusement park, influenced by art galleries, the cosmos, and more. There are a total of nine regions of varying thematic focus, such as machinima or performing arts.

This ambitious initiative, which is aided by the help of 21 core volunteers and many more contributors, aspires to give grant awards to selected applicants about twice a year. For the debut exhibitions, the SLEA was pleased to receive wide representation from the arts both in terms of genre, style and nationality.

On arrival, visitors will be given access to a HUD experience which enables ease of travel around the regions in addition to a teleport network. The Landing Pod provides a view over a Performing Arts Center, Arts Education and Innovation facilities, Machinima Land, and the dPod where SLEA’s archives are located for all to peruse. The SLEA regions are expected to further evolve over time as more artists collaborate and new exhibitions are brought into rotation.

Tansee emphasizes that the SLEA aims to draw attention to all artists, galleries, art venues, communities and art education locations in SL. That goal is evident by the presence of a massive T-shaped “connection bridge'' spread across two regions that aims to connect SLEA to the larger community of artists and venues. As visitors stroll across the bridge, they will encounter numerous promotional posters along the way. There are also additional kiosks that visitors can click to get teleport links and even more information about the wide range of artists and exhibitions to be found across all of Second Life.

A Second Life Destinations video was made of the area as well, with Tansee Resident as the narrator.

The Newser will have more on the SLEA later. For those wanting to see the area for themselves: Click Here.