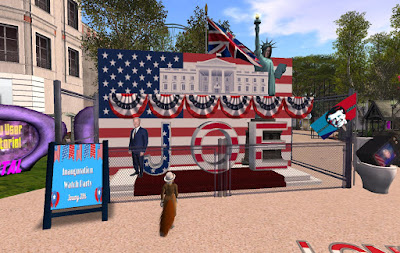 It's Inauguration Day in the United States, when the outgoing President steps down from power and the new one is sworn into office. In London City, I found a display for the incoming President Joe Biden, at London City (75/226/23). Next to it, there was another display poking fun at the soon to be former President Donald Trump, showing him in a missile launcher with his now former lawyer Giuliani hiding in some bushes. But some little touches here and there suggest not all the poking is at Trump and his men.

There will be events that day in the sim for the Inauguration, and earlier in the day for the former President's departure. Someone in the sim told me the first events will be at 8AM, but this is unconfirmed.