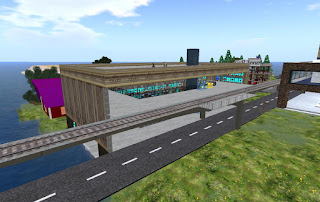 Some sad news for the fans of the Arcadia Asylum Library in HV Community, just down the road from the Newser office. The building will soon be closing. Possibly as soon as today.

Earlier Prof. Grey (BrianL61 Landar) had announced the upcoming end of the place.

It saddens me to announce that the Sunweaver branch of the Arcadia Asylum Library and freebie center will be closing on Februrary 1st 2021.

Due to Real Life demands the $1000.00 U.S. Dollars I spend each year in world must now be diverted to home repair and maintenance.

Eventually, someone approached Prof. Grey about the upcoming close, Cynthia Farshore. Yesterday, Wednesday January 27, I met up with them at the Arcadia building and they told me about the plans they had made. Prof Gray told me, "I'm shutting down this location and have turned over control of Anilis to another curator. In real life, my father in law (85) is starting chemo and the money i would spend in Second Life is needed in real life. ... He's a tough old goat, he'll make it through this."

As for what happens to the freebie store, Cynthia informed, "I am about to rebuild the old Puddle Jumper (mall) back on the (Farshore) airfield. So one section will be the Library. The new build will have a center lobby and wings opposite each over. One side is the freebie the other various sellers. So there will be a gap but in the end the freebies will still be around." She had plans for the items other than just the Sunweaver lands, "Also I'll have to check but hopefully I can also add the freebies to the Emporium in Caledon. 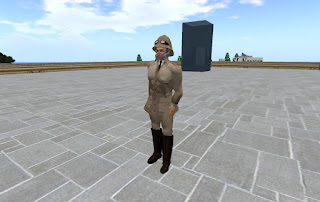 Prof. Grey added, "With a selection of 9487 free items she can rotate the goodies when ever she wants and keep it fresh, so to speak. Hazelee Haller is the new owner of Anilis Library she is expanding her current land holding and will be relocating Anilis to that sim. I will be taking this location down starting tomorrow (Thursday January 28) most likely."

Eventually, Prof. Gray had to check up on his father-in-law, and had to go. And so that may have been the last time I set foot in the Sunweaver Arcadia building, of which some of Gray's builds across the road have made the Newser a few times. While the Arcadia Asylum Library may be going away, the freebies will remain as part of another store.