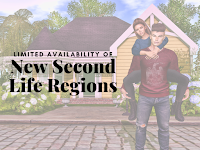 With Second Life's userbase increasing in recent months, most certainly mainly due to the Coronavirus quarantines, it was probably expected that there would be an increased demand for sims by the residents. On May 10, someone posted in the Virtualverse forums that the number of private sims had increased by 361 since March 30. Tyche Shepherd seems to be on hiatus, so we don't have his reports to go by.

With numbers like this when the number of private sims usually goes up or down by less than a tenth that, perhaps it should be no surprise to hear the latest announcement by the Lab. Yesterday on Thursday May 14, Linden Lab announced that it could no longer guarantee a new full private sim to someone who wanted one.

Due to the ongoing public health crisis, we’ve experienced an unprecedented surge in demand for new Second Life regions. While we are thrilled by the heightened interest, the increased demand has consumed our available inventory of full regions (there are still many parcels available on existing regions, both on the mainland and from private estates).

We are committed to maintaining (and improving) the stability and performance of Second Life. So while we are very gratified that we can be of help to people in these trying times, unfortunately, our current server systems cannot accommodate unlimited growth without adversely impacting that stability and performance. This means that region inventory in Second Life will be extremely limited and may not be readily available until early fall.

The Lab stated that one reason for the inability to handle the increased load was their transitioning from their current servers to cloud ones, which hasn't been finished yet, "As a result, we are in the unfortunate position of hitting the maximum capacity of our “old” servers until the “new” cloud servers are fully operational."

While the Lab stated new sims will be made available as old ones are closed, this limited availability will continue until the new cloud servers are fully operational, which they guess will be "early fall." In the meantime, Linden Lab suggested alternatives to full private sims, such as land on the mainland, or renting from an estate owner.

So far, as of the writing of this article, there have been just a few reactions in the official blog and Virtualverse. But they have been positive ones.

Will the demand for new sims continue to outpace supply, or as the US and other nations relax restrictions imposed due to the Coronavirus, will demand drop? Time will tell.