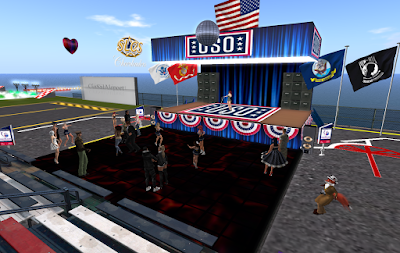 On Memorial Day weekend, no doubt there were a number of salutes to the US military. Among them was a USO tribute show held by the Relay for Life's Second Life Cheerleading Squad. It was held at the Agrippa sim, starting at 9AM SL time, and went on for hours with performers such as Lyric Serendipity and Ronnie Artano. The event raised thousands of Linden dollars for the Relay team. 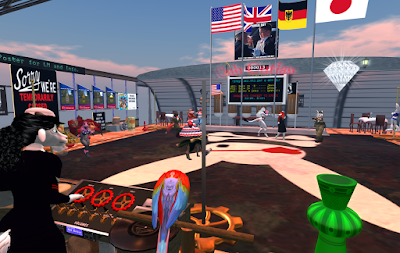 On Memorial Day itself, Club Cutlass would have it's own Memorial Day event, intended as a tribute to fallen veterans. Cynthia Farshore, a veteran herself, played a number of military songs, as well as some pop music associated with war movies and TV shows. People were encouraged to either dress in uniform, or in red, white, and blue, with a prizes of 1000L for the best male and female. The place was also decked out with a few national flags.

Liska Fuchs won the prize for the ladies with her red, white, and blue dress. The male prize was won by Zorro Wuramunga.

Veteran's Isle's monthly fundraising concert was not held this Sunday, but will happen on Sunday May  31.