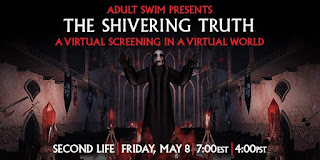 Fans of the Adult Sim show "The Shivering Truth," a horror-themed claymation animation, will have a reason to come on tomorrow. Linden Lab announced on the official blog there will be an inworld exclusive showing of two new and unreleased episodes of season two. The catch, you'll need to download the beta of a new limited-edition version of the official viewer that allows a new feature that allows for the broadcasting of video events.


Watch two classic episodes and two all-new unreleased episodes from the forthcoming second season of “The Shivering Truth” at this special event, to be held inworld at a new venue created exclusively for this screening.

During the event, you can chat with fellow fans of the show and other special guests as you experience the show together for the first time in the virtual world. Free limited-edition virtual gifts and mementos will also be distributed during and after the show -- just look for the “Free Gifts” kiosk near the front entrance.

The event also marks the first media partnership utilizing the new limited-release Second Life Viewer, which enables content creators and entertainment companies to broadcast live video events to virtual world audiences. In the future, you may see several new forms of entertainment including movie and TV premieres, live concerts, and artist/fan meet-and-greets. We're very excited to partner with Adult Swim for the debut of this new feature, which we plan to integrate into the main Second Life Viewer release in the coming weeks. 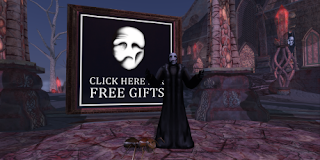 To take part, one has to download the beta-version viewer.  Those on Firestorm or other third-party viewers, or the current version of the official viewer will not be able to see the episodes. On the day of the event, Friday May 8, head over before 4PM SL time at ASB (128/128/23). There's a gifts kiosk one can touch to get some limited-edition freebies (the Lab says they won't be there for long). There will be repeat showings every hour to 9PM SL time.