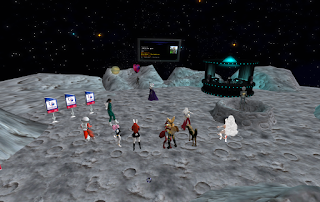 On Tuesday May 19, the Relay for Life's Team Sunbeamers held it's "Moon Dance" event. Taking place high above the Sunlight Bay sim, the landmark people were given led to a moon cannon that fired people high into the sky, and onto a lunar surface where the party took place. Many came in space suits, some realistic, some from sci-fi

Cynthia Farshore, whom owned the sim, DJed for the fundraiser. Instead of tips, people were asked to donate to the Relay kiosks. Besides the Sunbeamers, four other teams were represented: Team ACTS, Meli's Maniacs, Mievile Steampunks, and Roos With a Dream. The later had some of their members in uniform show up, dancing away.

Cynthia played a number of Moon-themed tunes, such as the theme to the movie "Moonraker," "It's Only A Paper Moon," "Teenage Moon, "etc. And there were a few sci-fi tunes such as the theme to "Red Dwarf," "Star Trekkin," "Star Wars Cantina," "The Piccard Song," "Seven Drunken Nights in Space," and more. There was much chuckling among the people parting.

There would be a few more attending than these pictures suggest (yours truly was having fun and it slipped my mind to take more at the most packed moments). At one point, Cynthia reminded, "It was Trader I think who made a bet the if we hit USD$250k, he would put on a purple dress. Well, I have a tune for that!" She then played "Start Wearing Purple."

The Moon Dance would raise a total of 32,570 Linden dollars, over 8,500 L going to the Sunbeamers. Cynthia was happy with the attendance from other teams, and stated she plans to have another Moon Dance later in the season. There will certainly be another next season.