Looking Foxy in World of Warcraft 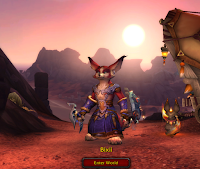 Last month, I mentioned I was on my way to getting a Vulpera character in the World of Warcraft MMO. Well, finally last week, I met the requirements, and did the questline in which my demon hunter and a few of the foxfolk helped out the Horde with a few problems, notably a peon strike, and afterwards were welcomed by Warchief Baine as members of the Horde. So finally that one friend of mine who's been egging me on now has a new foxy teammate. Since Vulpera had been going about making the best of what the desert had to offer, perhaps it might be appropriate for one to try and make the elements work for him. Not to mention earth magic "rocks." So I made my first one a shaman. 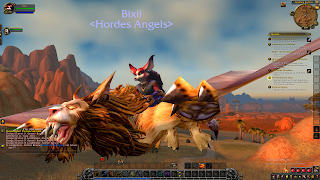 So what now? I'll probably be too busy for the next month covering the rest of the Relay season and the Second Life Birthday to spend too much time in Warcraft. Still, it's nice to know I can now be foxy in Azeroth as well as Second Life. Not that being a Tauren, Worgen, or Pandaren was so bad.

As Nydia would say, "good gaming to you."

Bixyl / Bixii
Posted by Bixyl Shuftan at 6:01 AM