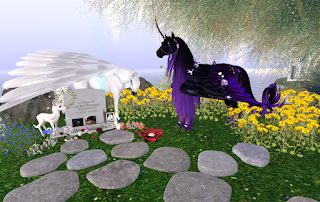 Fans of the Fantasy Faire, which took place just days ago, got some shocking news. Cerdwin Flanagan, a host of the event whom featured the festival prominently in her profile, has died. Word began getting around a couple days ago.

On the Fantasy Faire group, there were a number of comments expressing surprise and sadness. one,Sweecahcahche Ah, had a tribute for her.

Morning everyone, I would just like to pass on my Love and best wishes to everyone who knew Cer (Cerdwin Flanagan) who passed away too soon from this life. She will be sadly missed by many of us and I for one only met her at this years events but immediately was made welcome and had some fun times fooling around during the Coffee (Covfefe) Mornings hosted by cer. I have a link to my Tribute to cer on Flickr with pictures of many of you in it, please feel free to tag yourselves and leave comments. keep safe Love Titchy SweePea https://www.flickr.com/photos/89231395@N04/49915584092

You left us without warning Cer
Not even a goodbye
And I can't seem to stop
Asking the question Why?
We met one Fantasy Faire morning
For coffee and some fun
But when you left to Heaven
You took from us the sun.
Your coffee could brighten anyone's day
No matter what they were going through
But this world became much brighter
For having just met you...

For those wishing to pay there respects, a memorial has been set up at Acres (74/18/24). People can check out her screenshots on her Flickr page at https://www.flickr.com/photos/cerdwin/ .