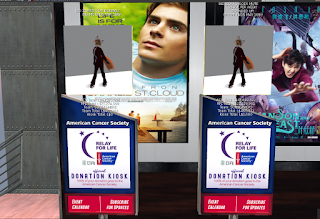 There's a brand new "Bid Me" event by the Relay for Life's Team Sunbeamers, one that could be considered part inside joke and part fundraiser. One of the team members, Zorro Wuramunga, is offering to take a vow of silence for a time.

Sunnies,  New BID ME has begun, ZORRO has offered to shut up for however long you bid him to be quiet.  How deep are your pockets?  He offered, I just set it up.  Now is your chance to silence the fox and donate to a good cause!

When dropping by Club Cutlass on Saturday, Zorro himself seemed surprised as to how fast this offer of his was set up, "Already?" When I asked team captain Rita Mariner how this would be announced in the Newser, she responded, "People will bid TO SHUT Zorro up!" As in previous "Bid Me" events, there's a default kiosk for those whom want to keep the volunteer as is. For the "shut up" kiosk, Zorro has promised to be quiet for every 2500 Linden dollars donated, rounded up. 4999 Lindens means no response to "What does the fox say" for a week. 5000 Lindens donated means he's quiet for two weeks.

Zorro, sometimes known as the "fisher fox" for his love of fishing games and often being seen with a fishing pole in his hand, has been the subject of a number of cartoons by the Newser. While much can be spoken about him, for now let's give him a salute, then bid away on his kiosks. Perhaps some of the Sunbeamers will be singing one parody song done by team member Shockwave Yareach.

The last day to bid on Zorro is Saturday May 16, on which the totals will be made final at 8PM SL time.

The two "Bid Me" events by Shockwave and Cynthia Farshore are still ongoing and will conclude on Saturday May 9. So far they have raised several thousand Linden dollars. The bachelorette auction with Skylark "Snowbuns" Lefavre was won by Rita Mariner.

Once again, the board and kiosks are in the back of Club Cutlass. https://maps.secondlife.com/secondlife/Sunweaver%20Bay/114/117/757