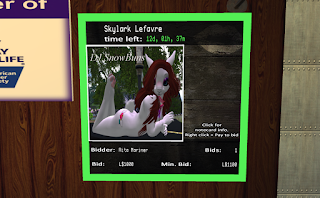 Just days after the success of Nydia Tungsten's "Bid Me" event for the Relay for Life's Sunbeamers, the team has three more fundraising events going on. On Monday, it was announced Skylark Lefavre, aka DJ Snowbuns, would be putting herself up for a date auction.

Beamers: You can now win a date with our own DJ Snowy.  She is up for AUCTION, at Club Cutlass.  It will run for about the next 12 days.  Min bid is 100L. but we all know Snowy is worth much more than that. Auction Board is next to entrance at Club Cutlass.  Can't miss it.  Snowy is displayed in all her glowing glory!

Talking to Snowy, she made it clear that the date will have limits. While watching a movie or a slow dance at a club would be nice, she will not take part in any intimate activity. She left open the possibility of a DJ session or drawing. More information is included in a notecard in the bidding board at Club Cutlass. Bidding ends Saturday May 2 at 8PM SL time. As of the writing of this article, the next bid will need to be at least 1200 Lindens. 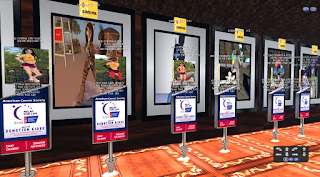 The other events are the two latest "Bid Me" events for Team Sunbeamers. Shockwave Yareach and Cynthia Farshore, the two most notable builders of the team, are putting their looks on the line. Both have three kiosks each for their event at Club Cutlass. Besides her default avatar, which would allow her to stay her usual goat avatar, Cynthia is offering bidders to make her change to a fox or wolfess for a period of time. For Shockwave, whom is usually a wolf, the options besides the default kiosk are to make him a fox or a goat for a while.

For both events, for each 2000 Lindens raised in the winning kiosk, rounded down, they'll have to spend a week as that look. For instance, 3999 Linden dollars would mean one week while 4000 would mean two. And as before, if the default kiosk comes out on top, the volunteer's appearance is unchanged. People have until Saturday May 9 at 8PM to make their bids.

Once again, the board and kiosks are in the back of Club Cutlass. https://maps.secondlife.com/secondlife/Sunweaver%20Bay/114/117/757