Relay "Bring Your Own Kiosk" Event 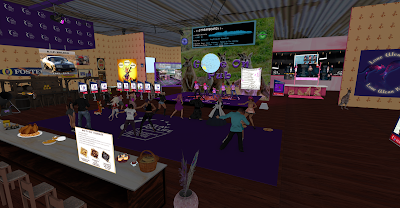 The "Monday With The Roos" event by Relay for Life's team "Roos With a Dream" on April 20 at an Australian-style pub proved interesting. They made it a "BYOK" or "Bring Your Own Kiosk" event. And so people from other teams came over to place theirs. Even though it was a small sim with a capacity of  25, in which a couple others with Premium accounts hopped in over the limit, a reported ten kiosks for ten teams were there. Bain Finch would say over group chat, "Think the Roos got a record. 10 kiosk BYOK with 17 people here.." 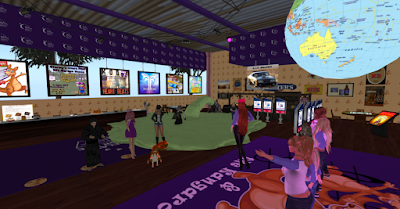 Matt Carlton, representing the Sunbeamers, was there. And thanks to her, the team got an extra few thousand, plus a few pictures from her sent to the Newser. Among them, a picture of some green goo being spewed onto the floor. Matt would wonder if this was "pea soup," and if there'd be a scene from "The Exorcist" soon. Each team there got at least 2000 Lindens, the Roos getting over 10,000 L.