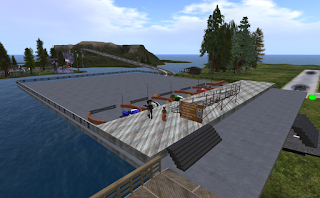 Tomorrow is the Carnival and Bumper Car Contest by Team Sunbeamers for Relay for Life. Taking place Saturday from 8AM to 4PM, the main feature will be the bumper cars. Not long ago, I had a few words with Shockwave Yareach and Cynthia Farshore about them.

"This event on the 18th will be epic!" Shockwave commented, "Bumpercars AND a full sized carnival. ... I've always thought that SL was the perfect place to make games of your own. I was playing with collisions.  And I figured out that making a shaped prim on the back of a car, the impacts from side and back would register.  But the front wouldn't. So bumper cars were born. I  bought the cars, and modified them for the job."

A sign near the course tells people how to play, touch the starter cube while green, then touch the coin slot inside the car. You're then all set to do some not-so-defensive driving. Shockwave explained, "You have to hit the sides or back with enough force.  Just tapping wont' do. You can take 10 hits.  First, you start smoking.  Then you burn, fire leaping out from the damage. And the fire and smoke, gets in the vision of the driver, makes it harder. So you have 5 minutes to inflict damage on the other cars.  10 points and that car is out. Five people can play at a time.  and I have bleachers so friends can watch. And coming up will be moving walls to give more of a challenge.  And cannons so the audience can try to take out cars too." 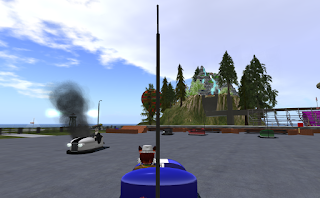 When asked how tricky was it to design, "Well, I took a shortcut by buying the cars from a existing builder.  Adding the code to make a working game out of it, was a bit complex. Since they are set physical, I had to turn off the physics to move them back to their pens, then back on again."

Shockwave and I would give the cars a try. Then Cynthia Farshore stopped by. She explained that the festival and contest's date in mid-April was to avoid bumping into too many Relay events, "We looked at the relay calendar and March is filled up." Shockwave added with a grin, "It gives us time add obstacles, cannons, explosives." 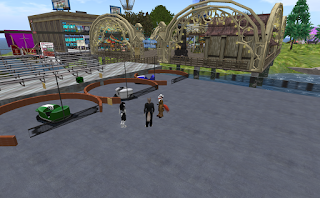 Prof. Grey's Arcadia Asylum freebie store and carnival came up, Shockwave saying, "Look at the carnival he added to the event." The place had some old time games, and a Moon Cannon, Cynthia commenting, "I told Prof. Grey I hope he gets attention since he helped in this."

Shockwave would add, "The ride is free.  But we ask for donations to our team.  Its at Sunlight Bay (15,157,26). It's running now if people are needing something to do while stuck at home, due to the virus, grab your friends, smash them up." Cynthia grinned, "Just know that when the event occurs it won't be so easy." 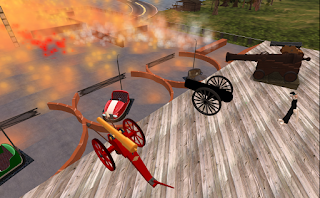 Later on, I would find barriers, and Cynthia had installed the cannons, "Muhahaha! ... Cannons to shoot at the contestants." There were a number there of various sizes and rates of fire, "Last night we were trying different cannons to see what worked best, might just use this mix instead of one type. Oh, and since last time you was here Shocky got the shifting barriers working. That rubber chicken like noise is a warning they are changing."

So it's official. The bumper cars are a real blast to play.