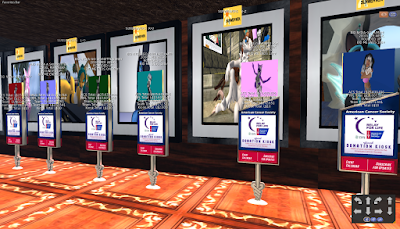 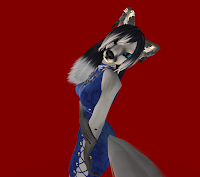 Team Sunbeamers is doing another "Bid Me" fundraiser event. This time, the vic- er, volunteer is sim and club owner Nydia Tungsten, whom is offering to change into one of five other avatars for a while. 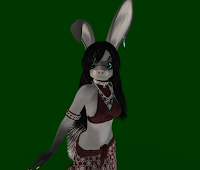 There are six kiosks for people to donate to. Besides the "default" kiosk to "Keep Nydia foxy," from left to right the choices are (2) Skunkgirl, (3) Raccoon/Rabbit hybrid, or her "Swtiched Destinies" character Nydia Tangen Baron, (4) Bunnygirl, (5) Purple vixen, and (6) normal human.

When the period for the "Bid Me" is over, for every 2000 donated in the winning kiosk, rounded down, Nydia has to stay that look for a week. For instance, if the top kiosk had 3999 Lindens, she only has to stay that appearance for one week, while if it was 4000 she would be stuck for two weeks. 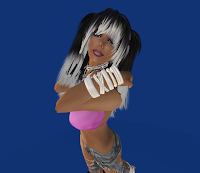 The kiosks will be up until 8PM Saturday April 18. Following the end of the Saturday Night party, the totals will be finalized and the winning choice made.

Correction: I thought the fifth choice was a purple huskygirl at first. But was told that was a fox avatar by a different maker.
Posted by Bixyl Shuftan at 6:02 AM